Millions of Dollars Recovered for Our Clients. Let us fight for the money you deserve!Contact Us NowFor a Free Consultation
Home
Attorney Profiles
Whitney Page Esq. 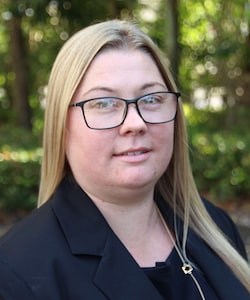 Whitney Page, Esq. grew in a military family and was raised in Japan. After completing her Bachelor’s degree at Florida International University, Whitney joined the United States Air Force. She was promoted to Airman Below the Zone and became a Noncommissioned Officer within her first four years. Whitney earned the Air Force Commendation Medal and was head of the Signals Intelligence briefing team. While in the military, Whitney continued her education and completed an Associates of Arts degree in Intelligence Studies and a Master’s degree in Homeland Security.

After the military, Whitney attended the Shepard Broad College of Law, at Nova Southeastern University, where she graduated with a Juris Doctorate degree. During law school, Whitney continued to work full-time and earned multiple Cali Book Awards.

Whitney’s practice focuses on fighting for the rights of those injured or killed as a result of someone’s negligence, including car accidents, slip and fall, wrongful death, product liability, cruise ship injury claims, food poisoning, bed bugs, and life insurance, and handles both pre-litigation and litigation cases.

Training
Awards / Volunteer Work / Organizations
Contact Us
Practice Areas
Client Reviews
★★★★★
"Throughout the whole process until my settlement, they kept me informed, they were professional to deal with and explained the the process in detail. I would not only use the Law offices of Jason Turchin again but I would not hesitate to recommend them to anybody. Thank you for your service." Ted M.
★★★★★
"I never had a problem reaching them or getting the answers I needed. They kept me well informed throughout my case, making sure that I understood what actions they were taking until the very end. Thank You, Jason Turchin and staff." Mallie M.
★★★★★
"I had a great experience with this firm. The attorneys and staff are very knowledgeable and helpful. I highly recommend this firm." Christopher S.
View More
Submit a Law Firm Client Review